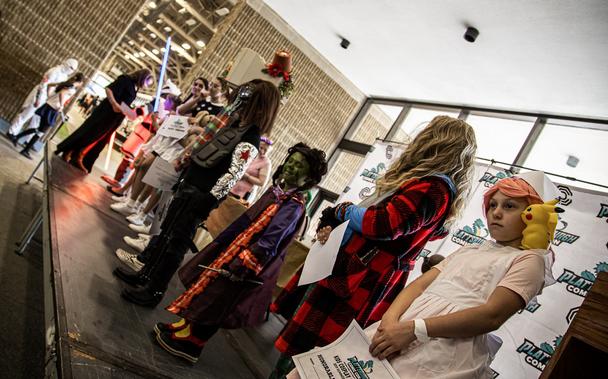 ​Want to learn how to create your independent comic? Learn the best tips and tricks from experienced writers and illustrators!

-12PM-12:45PM WRESTLING PANEL W/TONY ATLAS:
HOSTED BY: TBA
Come listen to Tony Atlas talk about his WWF/WWE career and more! Q&A with Tony at the end!

HOSTED BY: GRACIM COSPLAY
- how to make your own cosplay
- how to choose fabrics
- how to build a kit of tools for making cosplay
- where to start when making your cosplay
-Q&A

Listen to these celebs and more TBA! This panel is exclusive SATURDAY ONLY! Come hear their journey of their careers with Q&A at the end as well! DON'T MISS IT!

JUDGES: COACH MOSES, GRACIM COSPLAY, more TBA
Trophies and certificates and more to be given away to the winners! This is for the adult cosplay 17 and up, but the kids cosplay is Sunday ages 16 and below!

TRAINING BY: COACH MOSES
An introduction to stage combat fighting, explaining basic techniques such as footwork, blocking and striking. These guys have worked with fight choreography, TV, NY Jedi, street performances. Coach Moses brings you one of the best panels of the day! Come join this panel, come join the COSFIGHT!

-12:00PM-12:55PM BHNA PANEL
HOSTED BY: TBA
The audience gives the cosplay hosts PG truths or dares and will interact as their characters and there will be one to two mini games that will be played with the audience to earn prizes!

-1PM-1:50PM BATTLE OF THE MOVIES: TBA
HOSTED BY: ASAAD LOISEAU
Battle of the Movies is a show where we take two films for example Big Hero 6 vs the Lego Movie and we decide if both were playing in a theater and you’ve already seen them both but you could only see one, one more time which would it be and why? We help by breaking the films into categories and from there the crowd decides which film is the winner!

-2PM-3:15PM KIDS COSPLAY CONTEST FOR COMPETING KIDS AGES 16 AND BELOW!

JUDGES: COACH MOSES, GRACIM COSPLAY, more TBA
Certificates and trophies to be given to the winners! This is for the children's cosplay is Sunday ages 16 and below!